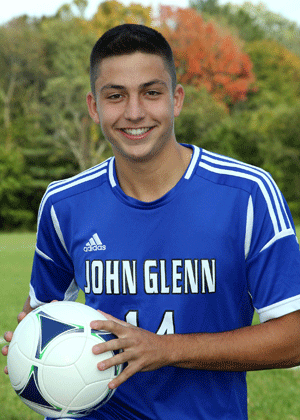 On January 26, 2015 in his senior year at John Glenn High School, Sean Urda tragically lost his life in a sledding accident.  He was one of those special people that lived every day as if it were his last.  He knew that a smile made a difference and that laughter could warm your heart.  He touched everyone he came in contact with in a special way.  “Work hard, play hard” is a phrase that applied to the way Sean lived his life.  He was always aiming higher and working to become better whether in school, on the field, or in life.  Above all else Sean loved his family, friends and soccer and he was loved in return.

At one year old Sean got his first soccer ball and it has never left his side.  By three years old, Sean was a soccer dynamo and the Elwood Soccer Club allowed him to begin playing early.  By eight, he was playing on both his team and his older brother’s team, when they needed subs.  Later, he went to play for Northport Soccer Club and his tournament team the Score FC.  He was recognized as a leader on his teams and named captain.  In high school, Sean was a three year varsity player and awarded All-League in his senior year. The #14, Sean’s jersey number, has become very important to his family and friends. His HS will retire his number once his younger brother graduates. The # 14 has become a symbol of Sean to many that cared about him.

Sean was an all-around athlete and enjoyed lacrosse, skiing, snowboarding, and his favorite gym sport – pickle ball, but his passion was always soccer.  In addition to high school athletics, Sean was a member of Natural Helpers, National Honor Society, the marching and jazz band and a counselor at the Huntington Playground Camp.

His dream was to play at a collegiate level and he hoped that his academic achievements and goals would align with a school that he would attend and competitively play soccer for.  Sean was accepted to all 14 schools he had applied to but unfortunately, he never got the chance to choose.

What we would like you to know of Sean is that for him people always came first – family, friends, teammates, classmates, everyone.  He went out of his way to listen, to make someone smile, and to help anyone when they were down.  He was 100% genuine and a true friend to all.