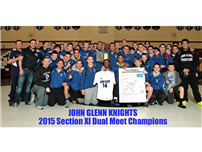 Following a 37-30 win against Hauppauge in the semifinals, the Knights went head-to-head against the Rocky Point Eagles in the finals. Elwood started off strong with an early 30-3 lead. Rocky Point attempted to make a late comeback, but Elwood’s resilience and perseverance were unbreakable. With a final score of 39-32, the Knights came out on top as the victors.

“We’ve been talking about this as our number one goal since the tournament was announced as official,” said varsity wrestling coach TJ Brocking. “It’s a great sign of how good your team is, and for a school of our size, the smallest school in Division 1 in Suffolk, it says a lot about our community and our kids. I couldn’t be more proud of how well the guys performed.”